In the Spring of 2015, VeriTranz was alerted to problems with an OEM plastic lower coolant level sensor found on many NABI, New Flyer, NOVA, and Gillig transit buses that were specified by Cummins in 2013 as a result of the 2013 EPA diesel emissions standards. Our VeriTranz engineers designed and developed custom coolant level sensor replacements and we have shipped over 35,000 of them to more than 210 transit agencies across North America to solve the problem. If your buses are experiencing similar issues, let us know and we will be happy to assist you with a solution.

How Our Coolant Level Sensors Solved the Problem

The OEM coolant level sensors addressed in 2015 had two main modes of failure: false error coding and coolant leakage. An unreliable float design can allow the float to hang upside down, indicating a critically low coolant level on a surge tank that is full. The OEM sensor may also leak coolant from the electrical terminals at the receptacle due to a large difference in coefficients of thermal expansion between plastic sensor and the stainless-steel surge tank.

VeriTranz by Veritech Inc. addressed both of these concerns with our own coolant level sensors’ improved design. Our floats move in a single plane, making false coding nearly impossible. They are constructed of 304 stainless steel as well, so it will not breakdown due to thermal cycling. The part number for this device is VT220594, and it will fit NABI, New Flyer, and Gillig. After a retrofit of the OEM plastic sensor with an epoxied harness plug and Deutsch 2-way pigtail, we released our VT220594-D, which is a "plug & play" replacement. A special model, our VT220596, with a smaller main bushing and longer pigtail was developed for NOVA Bus, and they have installed about 4600 units to date.

Our sensors are currently installed in more than 200 transit agencies in the US and Canada. With  well over 35,000 units installed, this device has a less than 0.2 % failure rate, nearly 400 times better than the OEM device it replaces. Eight agencies in the U.S. have over 1000 of our sensors installed at this point including SEPTA, Tri-Met, AC Transit and MARTA. We’ll work with you to create a custom design that keeps your buses on the road.

Below are some examples of the custom coolant sensor replacements VeriTranz designed—and continues to fabricate as needed. If you see an option below that best serves your transit agency, or if you need a completely custom solution, contact us online for prices and availability. 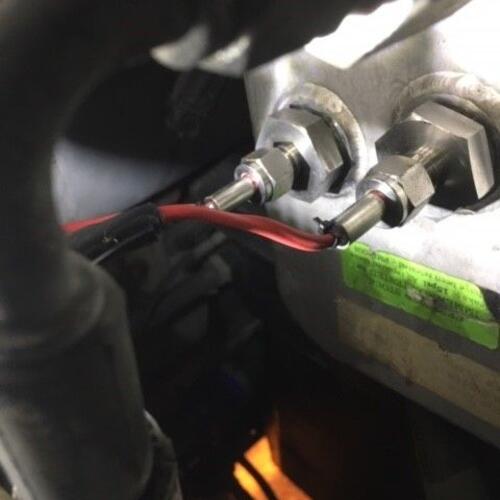 Our M20 X 1.5 stainless steel coolant level sensors were originally designed to replace the plastic OEM upper and lower sensors that began to be installed on transit bus engines in 2013. We first saw them and characterized them during the implementation of our 1/2 NPT stainless steel upper coolant level switch on NABI buses at New Jersey Transit.  Our first large scale campaign occurred at MARTA in Atlanta on 265 New Flyer CNG and 105 diesel buses.  MARTA continues to install our sensors on all new bus deliveries from Gillig after removing the plastic sensors during Post Delivery Inspection (PDI).

Another sensor part number we offer is our VT220594-FZ to replace the 3 or 4 wire capacitance style sensor being installed by many of the OEM Transit Bus Builders.  These sensors have the opposite failure mode of the plastic sensor meaning they will have a false negative mode of failure instead of a positive mode.  When components of the extended life coolant form a deposit on the teflon probe of the sensor, the sensor will indicate the presence of coolant when it is not there. This means the sensor may not alert the ECM that the surge tank is low on coolant.  The next line of defense is the high limit temperature sensor and that delay in shutting down the engine may lead to further damage.

The first M20 X 1.5 stainless steel sensors were fitted with a PKC receptacle to mimic the electrical connection on the plastic sensor.  This unit, our VT220594, is still used by some agencies today. Later, a pigtail was added to the OEM plastic sensor with a Deutsch receptacle and the VT220594-D was born, our most popular model to date.  More variations with Weather Pack plugs and other connectors were added as well.  After a very successful evaluation of our sensors by NOVA Bus on the fleets at MTA New York and Chicago Transit Authority, we developed the VT220596, a new model specific to the NOVA installations with a smaller main bushing and a longer and more robust pigtail.  NOVA has retrofitted over 3500 of their buses in the field with our sensors and has installed them OEM on their diesels.  We recently developed a hybrid variation of this device for a Locomotive application as an oil level switch.  We welcome your inquiries regarding your particular issues with coolant level or other liquid level applications. 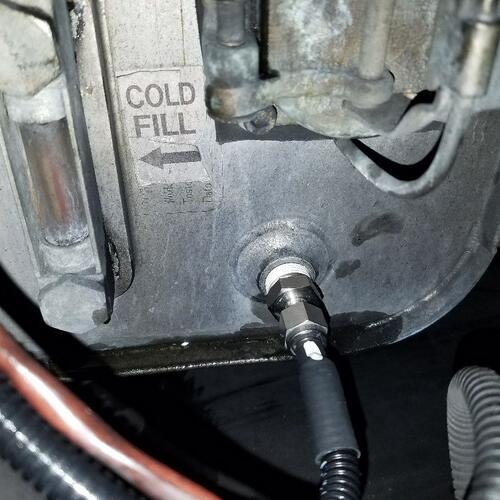 After being contacted by two agencies, each with a different application for the same 3/8 NPT 3 wire optical switch, we began an accelerated development of a new stainless steel float type sensor which could be used for a coolant level sensing application on older New Flyer Invero buses. We delivered a working prototype to the customer in 3 weeks and the initial installation was successful. Three agencies now have these units installed. The part number for this sensor is a VT220738-OPC and it carries a 3 way Weather Pack Plug. It is a drop in replacement for the OEM sensor.

After the optical sensor application, another 3/8 NPT coolant level sensor of the capacitive type was found to be installed in the surge tanks of some transit buses in 2017 at several of our customers. These units are called CAP 300 sensors and, like the optical unit, act as a switch to indicate the presence of or lack of coolant in the surge tank. The part number for our stainless steel float type sensor replacement is the VT220694-GCS and you can contact us for price and availability on either of these units. 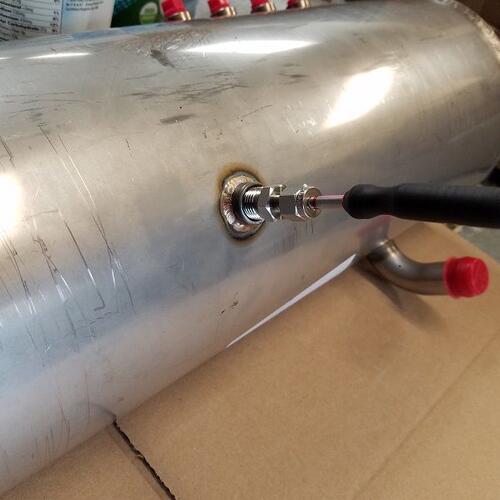 One of VeriTranz's most recent coolant level sensor developments is the 1/4 NPT replacement for the Casco coolant sensor and the Kysor coolant sensor, which have been used extensively on Cummins diesel engines from 2003 to 2012 and still being used on CNG applications on certain engines and bus models of different OEMs since 2013.

We now have added another 1/4 NPT coolant switch to replace the Fozmula upper coolant sensor in 2019 to 2021 New Flyer buses.  The part number is VT220614-FZ and is being installed OEM in some of New Flyers buses at the factory. 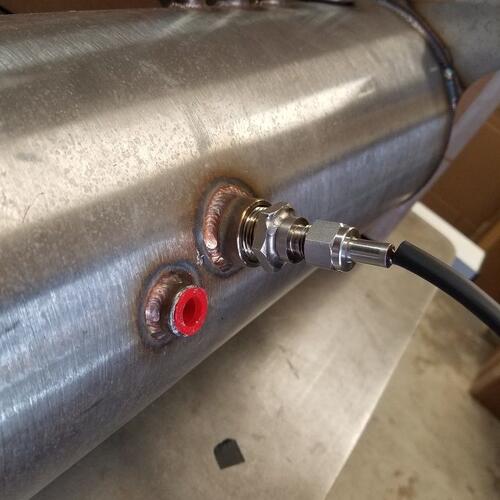 Veritech’s VT220794 is the latest iteration of our first stainless steel coolant level product, a ½” NPT upper coolant level switch.  This product was originally developed for a large transit customer with a fleet of over 1200 NABI buses.  The device replaces a plastic float switch which operated a surge pump to pump coolant from a lower coolant reservoir to the surge tank.  When the plastic switch failed due to thermal material stress, the surge pump would continue to run after the surge tank was full, ultimately burning out the pump.

Our all stainless steel design is unaffected by the constant thermal cycling of the transit bus coolant system and our positive action float assembly insures that the proper coolant level is maintained in the tank.  Over 2300 of these switches have been installed to date with an extremely high level of performance and longevity.  If you are having failures of plastic coolant level switches or sensors, do not hesitate to contact us for one of our standard products or let us custom design a new device for your specific application. 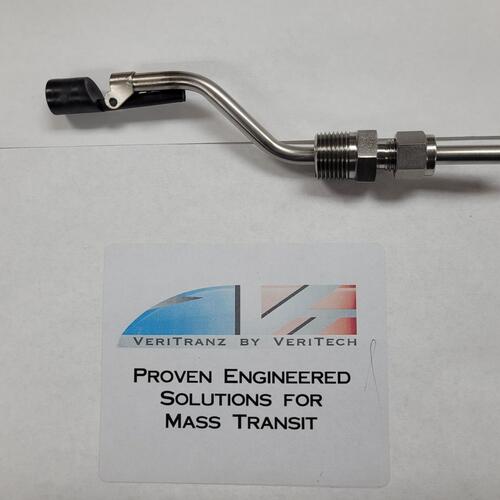 After one of our early adopter transit agency customers from Washington State contacted us about failures of a low mounted optical coolant level sensor in the HVAC surge tank of a 2016 Gillig bus, we sent a out one of our VT220738-OPC coolant switches as a replacement. Unfortunately the original sensor was mounted so low on the side of the tank, our float could not actuate to trip the reed switch.  So we developed a new sensor with an offset design which would raise out float off the floor of the tank by more than an inch.  We sent out the new sample and it worked perfectly.  Two agencies have purchased these so far and now we know it will replace both the 53-71691-001 optical sensor as well as the Fozmula S285/36 capacitance sensor. We can cover model years from 2016 to at least 2019 and maybe even later.